In the face of Wuhan pneumonia, there is no need to anxiety and panic, but now it is a critical time to re-examine healthy eating and exercise habits. By adjusting immunity, home exercise relieves boredom and rebuilds a new life in epidemic prevention.

Head is strong and 5 dishes are easy to make

Waiting in line to buy masks, sterilizing with alcohol, and other external protective actions have become your daily routine in epidemic prevention. However, the strongest form of epidemic prevention is actually to develop good immunity!

"Consolidating the internal immune preparedness system is the key to defeating this battle," said Lu Meibao, chief executive and chief nutritionist of Lianxin Nutrition. The immune system is like a combat force cultivated in our body. Nutrients are like fighters with different specialties. They can come in handy at important moments and perform different functions.

For example, vitamin A, which is rich in egg yolk, pumpkin, and carrots, can maintain the complete metabolism of the mucous membranes of the nasal cavity, eyes, and oral cavity, and build a protective film against germs. Vitamin C, which is rich in guava, kiwi, and strawberry, can make the body fight against viruses The pioneer team of the United States is also the nemesis of the virus-interferon; the vitamin D rich in mushrooms and fish activates immune cells and can regulate the immune system.

"The dietitian's dining table studio" nutritionist Liang Jiawei pointed out that the epidemic prevention diet is based on a balanced diet, nutrients that enhance metabolism and antioxidant power, increase resistance and reduce the risk of infection.

How to eat to improve immunity?

"70% of the body's immune cells are in the intestine. Take care of the intestinal health first, and the immune system can be balanced," said Lu Meibao. She insists on preparing at least one meal a day, and one of her breakfasts is a yogurt with protein, calcium and probiotics, with vegetables and fruits. Vegetables and fruits are rich in dietary fiber and become a source of probiotic food. Probiotics can multiply in the intestine and inhibit bad bacteria. This simple and practical anti-epidemic dish, she named it "Rainbow Fruit Yogurt".

The material source of the bright natural pigments of these fruits and vegetables is phytochemicals. Phytochemicals give vegetables a defensive function that resists damage from insects, bacteria or viruses. Phytochemicals are taken by the human body to help fight inflammation, oxidize, and regulate immune function.

For example, curcumin contained in turmeric is a kind of phytochemicals. Turmeric is also the epidemic prevention ingredient with the most divergent views from east and west after we interviewed many nutritionists and Chinese medicine practitioners.

Lu Zongyan, a traditional Chinese physician in the Taipei Branch of the China Medical University Hospital, said that turmeric can help to stimulate qi and blood circulation in the body and open the internal pathways. "Viruses or bacteria invade the body and produce an immune response, such as inflammation." Liang Jiawei further explained, "Antioxidants such as curcumin can ease the path of cellular inflammation."

The most turmeric-rich ingredient is curry, and "alive" recommends the simple "gold turmeric milk". Turmeric milk is derived from traditional Indian beverages. In recent years, it has been wildly spread in European and American media. The New York Times describes it as "a calming panacea before bedtime". Many bloggers also upload beautiful photos and share them on social networking sites. This "Golden Milk".

Heat the milk, then add the turmeric slices, old ginger slices and cinnamon sticks and boil, sprinkle the turmeric powder, and finally use brown sugar to taste. The taste of turmeric milk is unexpectedly good, not too spicy. The sweetness of cinnamon neutralizes the earthy taste of turmeric, which is warm and refreshing.

Another notable phytochemical is allicin. Lu Meibao said that because the allicin activity will disappear when heated above 57 degrees Celsius, it is recommended that raw slices be sliced, beat with the back of the knife, and contacted with air for 10 to 15 minutes.

Another anti-epidemic dish, "Oysters with Garlic and Ginger Salsa", was served. Salsa contains raw garlic, and oysters are rich in zinc. Liang Jiawei explained that if the amount of zinc is sufficient, it can allow cells to replicate normally. When a germ invades, immune cell replication can function properly. Zinc is commonly found in shelled seafood, meat or pumpkin seeds. Multiple intake is recommended, and oysters should not be eaten every day.

You can also find dishes suitable for the anti-epidemic period from ancient folk therapies. The old Ji'an, who has operated the grass shop for nearly half a century, the third-generation heir Wang Baiyan recommended a kind of mysterious, smelly grass, and then brought out a plate of cold salad. It tasted like chewing rhizomes at first, but after a while, the sweetness and sweetness of the grass and the sauce unexpectedly matched.

It turned out to be Houttuynia cordata. The fishy herbaceous amaranth grows on the banks of moist streams and mountains and is named after it smells fishy.

The third generation of the old grass tea bar. Lao Ji'an was founded in 1972, and has a history of more than a thousand grasses in the old shop for nearly half a century. It inherits the wisdom of folk food therapy. In 2017, it was transformed into a hand-made grass tea bar.

Houttuynia cordata can also be used to make tea. In addition to Houttuynia cordata, there is also a cup of "Golden Brocade Blue Tea" with honeysuckle, isatis root, money mint and perilla. Honeysuckle helps regulate immunity. Lu Zongyan said that honeysuckle can clear heat and detoxify and evacuate wind and heat.

Of course, during the epidemic prevention period, it is necessary to pay attention to nutritional balance, and it is not advisable to use any kind of ingredients and over intake. When suspected of pneumonia in Wuhan, you should seek medical treatment as soon as possible.

Liang Jiawei reminded that during this period, do not eat raw food, try to quit sashimi and semi-cooked eggs, avoid viruses and bacteria; also don't forget to drink plenty of water to prevent the upper respiratory mucosa from being wet due to dryness, so that viruses and bacteria are organic Can be multiplied.

To build a nutritional barrier, build a good internal force, and maintain physical and mental strength are the only ways to resist Wuhan pneumonia. 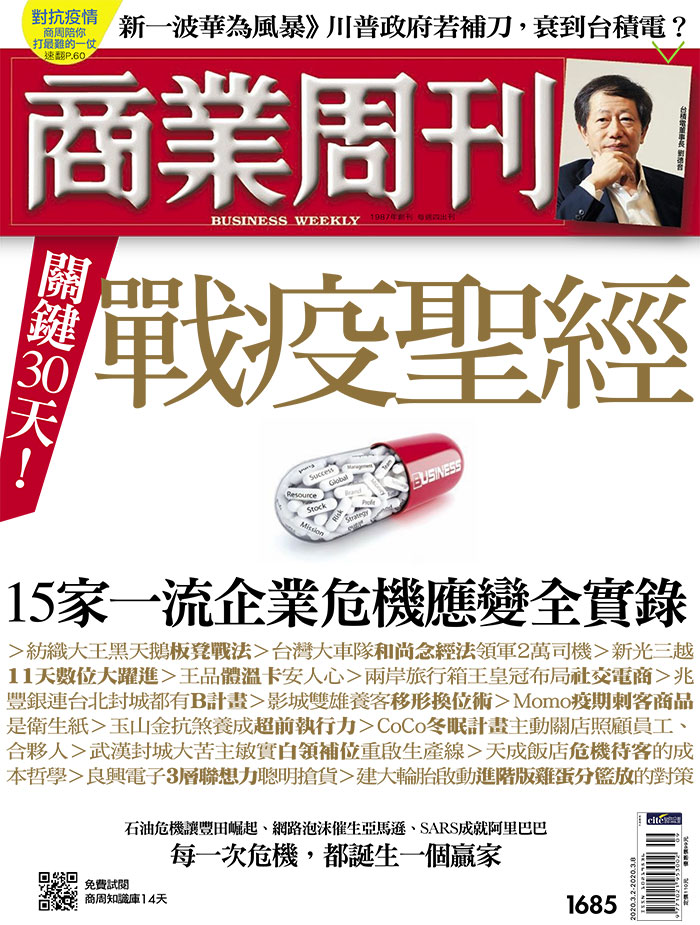 The oil crisis has given rise to Toyota, the dotcom bubble gave birth to Amazon, SARS makes Alibaba

Every crisis, a winner is born