Taiwan's catering industry is welcoming the longest winter. Since January, Wuhan pneumonia has erupted, and the catering industry has been the first. The news about closure, decline in performance, and shortening of business hours has continued. So far, it is still shrouded in anxiety.

Among them, the in-depth layout of China's industry has the biggest impact. Due to the spread of the epidemic, major stores have gradually closed. In China, there are 600 gourmet KY at 85 ° C. In January, the revenue was 1.84 billion yuan, a year-on-year decrease of 6.4%; China ’s Wangpin Group, which has hundreds of stores, saw a 30% annual decrease in China ’s revenue that month.

In the country, the main Hanlai cuisine in the banquet market has been canceled for 100 spring wine seasons alone, affecting nearly 10% of the banquet hall performance; Ding Taifeng, which has 30% of tourists, saw a 10% drop in the number of visitors in Shuangbei Store in the past month; In the middle of the month, nearly ten star-rated restaurants, including the Marriott Hotel and Ambassador Hotel, announced the cancellation of afternoon tea or dinner for buffets.

Even the small and medium-sized catering industry, which accounts for the majority of the Taiwan market, has fallen. According to iCHEF, a restaurant POS system provider, 24 million records of Wudu restaurants outside Taoyuan were analyzed. The catering performance in the first week after the New Year decreased by 8.2% year-on-year. Compared with the SARS outbreak in March 2003, the catering performance decreased by 4.82% year-on-year. .

The founder of iCHEF Cheng Kaiyou explained that compared with SARS, the symptoms of the epidemic are not obvious, coupled with the rapid flow of information and a higher degree of panic, which has caused a sharp contraction in consumption. "I am afraid that the impact of this catering will be greater than SARS. reshuffle the card!"

At the moment of bad news, we found that a major catering change is also being staged intensively. As the epidemic heats up, the process of change is accelerated. The key word is: digital change.

Catering performance, average annual reduction of more than 8% in the first week of the year

The digital transformation of catering is to expand business and manage members and reduce labor costs. There are three main approaches:

The first is to establish a membership system such as the App, allowing consumers to order food, pay and accumulate points online, and use coupons to increase offline store consumption; the second is to join the delivery platform and adjust the big data given by the platform. Product content and store locations, Uber Eats has launched a series of POS system services; the third is to operate Line @ pipeline and operate social networks.

For the restaurant industry, this year was originally a digital transformation year. The reason is that the department stores in Taipei ’s Xinyi District expanded excessively last year, and the catering industry followed suit, but the performance was dismal, which made the industry describe: “The catering industry is showing a puffy physique”; Furthermore, Foodpanda and Uber Eats The two major delivery platforms covered 19 counties and cities across Taiwan at the end of last year, and more than 10,000 restaurants joined the platform, which is subverting consumption habits.

This means that in the past, the catering industry has entered the department store business district or expanded its stores, which is already the old way. The customer acquisition rate is getting lower and lower, and many operators feel the bottleneck of growth. Now the black swan epidemic strikes without warning. The crisis has also accelerated the fire of change.

Businessmen who visited the catering industry throughout the week found that many businesses are accelerating their digital layout. For example, the Taiwanese chain coffee shop King Luisa is strengthening its membership system. It is expected to launch an online ordering function in the middle of the year. Consumers can choose stores on the platform, as well as internal or Take-away meals no longer need to be ordered at the counter and accumulate points for consumption.

Executive Louisa explained that the system has been in development for more than half a year, and now it is in an epidemic situation. In the past month, the sales revenue in the store has fallen by 10%. It can be seen that consumers are still worried about going out, especially the personnel in front of the counter, so they will test and launch as soon as possible.

"Hanlai" will join the delivery of quality, manpower, and moving line

Many groups have begun to embrace delivery, including Hanlai and Wang Pin, and have actively invested in resources.

"I used to think that delivery had little to do with us, but now being pushed by the epidemic, I have to break through!" A director of Hanlai admits that Hanlai mainly focuses on banquets and buffets, creating annual revenue of 3.7 billion yuan. Never I thought about cooperating with delivery, but recently saw the performance plummet. I contacted the delivery industry for the first time in mid-February. It is expected that its vegetables and Cantonese cuisine will join the delivery.

But Hanlai argued internally. In addition to the high commission of about 30% for each order on the platform, including catering quality, manpower configuration, kitchen line, and on-site operation complexity, all are the focus of discussion. "Some executives believe that since the on-site business volume has been reduced, do delivery as soon as possible; however, some executives say that the epidemic will eventually pass. Once delivery is started, quality may be at high risk." A senior executive pointed out the dilemma.

The brand they discuss the most is Celebrity Place, a Cantonese restaurant that originated in Hong Kong and won two Michelin stars for four consecutive years.

In mid-February, the Shangzhou team came to Dazhi Store of Celebrity Square and found that the operation was unsuccessful. The group canceled or postponed it. The holiday meal period was reduced from two rounds to one round. Currently, take-away meals are used to save the situation.

However, the chef's psychological obstacles are difficult to overcome simply by taking out meals. "Crispy fried chicken is our signature dish, but because the skin is air-dried to fry, if the temperature is not enough, it will not be crispy. We would rather not take it out." Celebrity Square Deputy Chef Xie Cixing explained that the take-out is mainly fried items Is the result of weighing.

Speaking of the delivery service that will be launched in the future, he admitted that it was a great challenge. Because as a Michelin restaurant, the meals are prepared by the chef with precise calculations. For example, in order to ensure the taste of the sirloin pot when serving, depending on the weather, cook for 50 seconds to 1 minute, so that the consistency of the soup is perfectly proportioned.

"But the delivery of meals is uncontrollable, and it shakes during delivery. If something goes wrong, it hurts the brand. The way of catering is still being designed. If you ca n’t deliver it, it will be worthless." Xie Cixing even filled with Worried, I still firmly believe that delivery is imperative, "This is the level that all chefs must pass!"

"Kingpin" puts down the store to experience the burden of research and development of food delivery, KPI followed

In the past, Wang Pin was known for its on-site caring service, and built a tens of billions of catering empires step by step through the store experience. Even with the wave of delivery, only five brands including 12MINI, Le Yue and HOT 7 have joined the delivery. platform.

Under the pneumonia epidemic in Wuhan, let it accelerate the new layout. A senior Wang Pin frankly said, "Taiwan ’s performance has not had a big impact, but the delivery and take-out layout has really been slow, because in the past, the live experience was too much emphasized. While the current (outbreak of the epidemic) is not serious, do it quickly! I am afraid that I will not keep up! "

The research and development unit established by Wang Pin last year is developing a delivery menu, including product design, manufacturing process and packaging materials, which must be measured. Once Wang Pin is actively doing delivery, it is tantamount to the in-depth layout of the online market. This will not only affect member operations, but will also impact the internal evaluation method. Wang Pin is re-planning the store KPI, including the operating results of the delivery and the online platform. Scores, etc., will be one of the evaluation items.

On the other side, the golden three wheat is planted into a virtual kitchen.

Ye Guanting, the CEO of Golden Mak Group, believes that even if only 4 stores did delivery last year, single-store delivery performance accounted for 10%, but he judged that Taiwan ’s delivery business opportunity has matured, and as the epidemic heats up, it will only drive performance. Therefore, 2 to 3 virtual kitchen bases will be opened this year. If launched, this will be the first case in the domestic chain restaurant industry.

At the same time, he has expanded the manpower of the Information Department and is integrating and analyzing member data. He explained that from a traditional store, nowadays, when he is planning to deliver delivery platforms, virtual kitchens, etc., he must understand how to connect online and offline, and test the depth of consumer understanding.

This will be a shocking year for the restaurant industry, but there are also opportunities to usher in new business opportunities. Looking back at SARS 17 years ago, when the Taiwan catering market took McDonald's and Wangpin Group as indicators, the two operators survived the catering storm through standardization, and in the future, it began the process of gradual SOP and food safety in Taiwan.

Today's Wuhan pneumonia has become a digital test for the catering industry. If it goes through smoothly, it means that Taiwan is closer to the era of catering, which means that you can make order at stores, delivery and take-away with a mobile phone. When consumption paths and habits can be recorded, member operations are gradually deepened, and personalized catering services will be further enhanced.

However, this also means that if the players can not keep up, they may be eliminated quickly. As Zhewei Yang, CEO of Jieli Catering, said: "Taiwanese food and beverage is too inflated, and now it is like letting fat people go to the hospital to become seriously ill, and health will change in the future! Now, see who can sustain it!"

． Wang Pin: At present, 5 brands under its brand have joined the delivery platform, and other brands are officially pushing delivery. Hanlai: R & D of take-out items, discussion and cooperation with delivery platform. Louisa: In the middle of the year, we launched an online ordering system to avoid contact with counter personnel. Golden Three Wheat: Speed up the construction of virtual kitchens and increase the manpower of the information department. Dumplings: Using Line @ 群 to actively promote e-commerce online shopping business 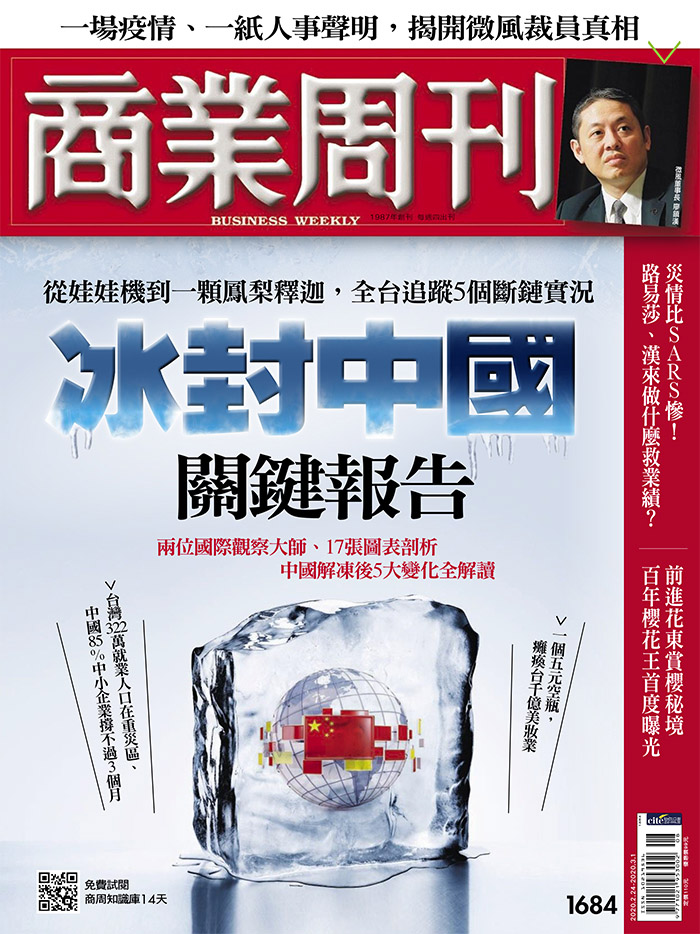 Full Magazine Catalog Single Issue Buy Now Subscribe Now
Subscribe to magazines and subscribe to Business Weekly, there are always good choices! >> Get it now
Tweet
Beta forever
Global toys are out of stock! Thousands of doll machine shops are afraid of half
recommended article